Praful is working on a special new project. Together with some of his favourite musicians he went into the studio and came back with enough material to fill three (!) albums. The first album that was released of this project is called ‘Silence Speaks’, the second album of the trilogy is ‘Call of the Beloved‘. This new album is available on iTunes and Spotify but also via Bandcamp.

Below you can find a taster of this album’s new music. On October 15 Praful & Spirited Tribe will have their presentation of this new album in the wonderful Tobacco Theater in Amsterdam during their concert (which will be produced by HeartFire).

Call of the Beloved

A collection of songs and instrumental pieces, with influences and inspirations taken from South American Folk music, Sanskrit Mantras, Rumi poems, Yoruba spirituality and more. Songs that speak of love, peace and surrender. Praful gathered his favorite musicians and a love support team, the Spirited Tribe, to record music from a shared magical experience of love and friendship.

A few words from Praful on the new album/project

“For a few years, I’ve had the dream to gather some of my favorite musicians and record in a big, inspiring studio. I was longing to invoke and record the kind of magic, inspiration and spontaneity that we experience during concerts. Like back in the ‘old’ days, in the last millennium, when there was no way of recording other than playing all together, instead of using an overdubbing and internet sharing process which is so common now in this digital age.
In January 2017, we spent 4 days in Fattoria Studio near Osnabrück, Germany: 6 musicians, a love support team, a cameraman and a sound engineer. The plan was to record both new compositions I had especially written for this project, as well as give lots of room to improvise and create entire pieces out of the moment. The love support team of 4 goddesses was there to support us, feed us, hug us and be there physically inside the studio doing Yoga, Massage and Healing while we are playing. My hope was, in this field of love, magic would happen and divine inspiration would come kissing us.
What happened during those 4 days was beyond all expectations and belongs to my most beautiful and joyful experiences in music and friendship – we became a truly Spirited Tribe. All that these sonic diamonds needed was a little polishing, adding a few voices and extra elements. So much music was recorded in this short time, that it is released on 3 CDs with each a different theme. This album, Call of the Beloved, is the second of the trilogy, presenting mostly songs I had composed prior to the recording session. Some of them are instrumental, some feature lyrics, in various languages: English, Sanskrit Mantras, Rumi poems, Portuguese, Yoruba, Hindi or simply fantasy words channeled in the moment.
The 1st CD, Silence Speaks, contains the most delicate, soft and purely improvised pieces, which make the perfect soundtrack for Massage, Healing, Yoga or simply relaxation. Completing the trilogy, the 3rd CD also offers extended, improvised pieces, which carry a more shamanic, tribal energy that build from subtle to flowing rhythms, similar to Sufi whirling music.” 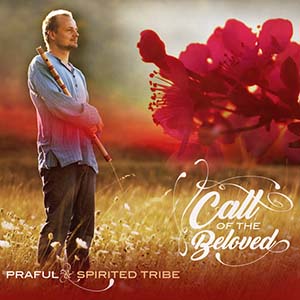