Fia in Concert :: 8 May 2022 @Dominicuskerk Amsterdam EXTRA Concert (Sold Out)

Fia in Concert :: 8 May 2022 @Dominicuskerk Amsterdam EXTRA Concert (Sold Out)

Tickets for the May 7th concert were sold out the same day they became available. Therefore we planned an extra concert with Fia! Tickets for this May 8th concert are available on April 9st 2022 (10.00 AM), here.

Update April 12th: the extra concert of Fia on May 8th is now sold out too, thank you very much for your interest!

We feel blessed to welcome the Swedish singer/songwriter Fia Forsström back to the Netherlands! With her inspirational lyrics and catchy melodies, Fia has a unique way of weaving music that empowers the listener to drop deeper into themselves and find their own medicine. Since the release of her debut album Fia has been touring world wide and continues to touch hearts wherever she goes and it is with joy she welcomes us into her mystical sphere, devoted to reminding us of our magic.

Let’s come together and remember!

Based in the countryside north of Stockholm, Fia Forsström (known mononymously as Fia) is a folk pop singer/songwriter who with her inspirational lyrics, empowering songs, and catchy melodies quickly enchanted hearts all over world with the release of her solo debut Made of Stars in 2016 which was crowdfunded together with her fans. Building a solid platform through social media and word of mouth, Fia took her place as one of the leading voices on the motivational music scene with Legacy of Light (2017) and Waterfall of Wisdom (2019), both of them recorded and released with the help of her loving listeners.

Fia was born in 1994 in Kista, Sweden. She began playing the oboe and writing songs at the age of 10. During her teenage years she picked up the guitar and piano being part of different ensembles while attending the music program at Westerlundska High School. She released her solo debut ”Made of Stars” in 2016 independently with the support of fans, and in 2017 Fia garnered even more widespread acclaim with the follow up ”Legacy of Light”. At this point Fia was a known name in the spiritual and world music community and her star continued to rise with ”Waterfall of Wisdom” released in 2019 which wrapped up the acoustic album trilogy.

In 2020, her music was featured in a meditation app developed by the University of California Santa Barbara Center for Mindfulness and Human Potential, bringing her songs to high school students all over the US.

Fia has released several albums like Made of Stars, Legacy of Light and Waterfall of Wisdom. Her latest release is her new single ‘Glorious One’. In December 2021 Fia released her new EP MEDICINE – chants for the modern mystic. This EP was produced, arranged, mixed and mastered by Robert Himlakropp Eklund. 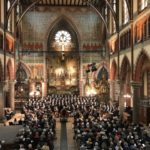 Transport
De Domincuskerk is located 8 minutes walk from Amsterdam Central Station, so nearby parking is not easy and not advised. We advise you to come by public transport or use your bicycle. Use Park & Ride facilities if you come by car to Amsterdam. Check the use of public transport here to plan your journey.

Parking Garage
There are two parking garages nearby:

Tickets
Tickets for the May 8 concert are available on April 9st 2022 (10.00 AM), here. Update April 12th: the extra concert of Fia on May 8th is now sold out too, thank you very much for your interest!

Facebook
Updates also in the Facebook event page, here. Click on ‘attend’ in the event and don’t forget to invite your friends to the event who’ll think will be interested. It helps a lot, thank you!