Deva Premal & Miten and Friends will be with us on two evenings, October 11 & 12, 2022. Ticketsales has started via Kunstlinie Almere.

This concert is Sold Out but there is a waiting list available. Check the ticketlink and practical information at the bottom of this page.

Deva Premal & Miten celebrate 30 years of love, life and music as they embark on their World Tour 2022 accompanied by their great Temple Band (Joby Baker, Spencer Cozens and Miles Bould). 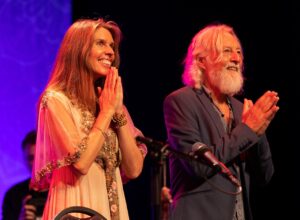 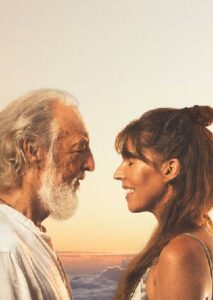 Deva Premal & Miten just released a new album ‘Timeless’. Conceived and created amid the lush tropical tranquility of the couple’s remote jungle retreat in Costa Rica, TIMELESS contains many jewels – among them, a collaboration with 5-time Grammy Award winning singer-songwriter India Arie, who lends her own incandescent voice to the album’s key track “Tara Mangalartha Mantra”, a prayer for climate balance. All proceeds of this track are donated to 4ocean.com. Other collaborators include Grammy-nominated world devotional music pioneer Jai Uttal (Campfire Sri Ram) and the duo’s longtime producer/multi-instrumentalist/singer-songwriter Joby Baker, who created the soundscape of this opaque musical palette.

The tracks are more varied in concept than previous albums, but together they add up to an intimate glimpse into the world of Deva and Miten that invites meditative participation. Deva’s latest version of The Gayatri Mantra Japa is the corner-stone of the album. It is a deep and intense musical odyssey into the core of this most ancient of all mantras. (Hold on to your hat).
Along with the mantras sits the ethereal ‘I just Close My Eyes’…Miten gently whispers the english lyric as we drift, dreamily downstream, accompanied by the voices of Deva and Joby

The most recent release of Miten The Jungle Sessions is a collection of songs recorded in lockdown by spiritual messenger, musician, singer and composer, Miten. It is the third in a trilogy of albums which began in 2016 with Temple at Midnight, which hit #1 on the Amazon and iTunes world music and new age charts. Miten followed this with his acclaimed Devotee album, released in 2019, featuring life partner, Grammy nominee Deva Premal.

The Jungle Sessions is a record of Miten’s extended stay with his musical and life partner Deva Premal in a jungle hideaway in Costa Rica. Recorded at the Blue Spirit Resort, where Miten and Deva were joined by their longstanding production collaborator Joby Baker, songs such as the desperately humorous proclamation of I Need A Beach and the swampy groove of Om Shanti Om capture the spirit of a place where the troubles of the world are placed on the back-burner by the balm of music, mantra, meditation and pristine nature.

Tickets
Ticketsales has started via Kunstlinie Almere. This concert is now Sold Out, but there is a waiting list available.

Do you have questions about your ticket? Please contact Kunstlinie Almere, their ticketshop can be reached by phone from Tuesday to Sunday between 11 a.m. and 5 p.m. The desk is open from Wednesday to Sunday from 11 a.m. to 5 p.m. Phone: 036 84 55 555 or email ticketshop@kunstlinie.nl.