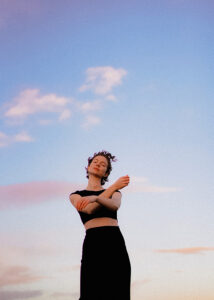 We feel grateful to welcome back to Amsterdam, the amazing Ajeet with her new tour Blooming. This event is already Sold Out, If you have bought tickets before/during the pandemic, your ticket is valid for this date (October 1st).

UPDATE July 23th 2021
The concert of Ajeet has been rescheduled to October 1st 2022. Under the current Covid measures in different EU countries, touring is still very difficult (to say the least) so we dediced to reschule. All tickets bought stay valid for this new date. We hope to see all of you on the new date!

A message from Ajeet:

We are elated to announce that Ajeet and her band will be returning to tour in 2022! Tour dates from the European tour have been rescheduled with much anticipation of a joyous, safe and magical reunion with all of our beloved community!

Current tour dates for 2022 are announced, with certainty of additions, surprises, and much more still to come!
Ajeet, Aisling, Raffa & Sam can’t wait to meet you in song again soon!

Ajeet is joined by Raffa Martinez on percussion, Aisling Urwin on harp and Sam Killeen on guitar. After the sold-out concert in 2019 we moved to a bigger venue this year, Theater Amsterdam. A beautiful theater in the western part of Amsterdam.

After a surreal time for us all and pause from touring, we emerge from hibernation ready to bloom into a new beginning. Join Ajeet for an evening of ambient meditative spaces, intimate poetry and mystical realms through a truly original musical journey. Accompanied by Sam Killeen on guitar, Aisling Urwin on harp, and Raffa Martinez on percussion, allow yourself to be carried into a space of deep connection. Let your voice join with many in a call for healing, a return to ritual and a sense of peace through song.

Join Ajeet and her band as they weave together ancient rhythms and melodies, deep meditative spaces and heart-opening songs to bring you on a journey through music. Let your voice join with many in a call for healing, a return to the ancient ritual of prayer through song. With her beautiful voice & her radiant presence she will touch your soul deeply and set your heart on fire. More info on Facebook here.

The video below was released on July 23rd 2021 to celebrate the release of Kiss the Earth Live:

The video clip below was shot during her concert in Amsterdam we organized in 2019.

After a surreal time for us all and pause from touring, we emerge from hibernation ready to bloom into a new beginning. Join Ajeet for an evening of ambient meditative spaces, intimate poetry and mystical realms through a truly original musical journey. It is their third European Tour and they are just as excited as we are!

‘From the first note, Ajeet’s voice feels like the warmth of the earth rising through your body, creating a sense of inexplicable peace that helps you suddenly relax in a knowing that you are connected to every living being through this sacred sound.’ 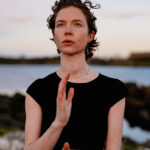 Ajeet is a world music artist weaving inspiration from traditional folk to mystical and meditative soundscapes. The band come together from Spain, Ireland and the United States to offer a musical experience which transcends boundaries and takes listeners on a journey through melody and sonic texture. Many experience Ajeet’s music as healing, rejuvenating, and a place of deep connection.

Collaboration is central in her work, and some of her collaborators include Trevor Hall, Aisling Urwin, Sukhmani Rayat, Rising Appalachia, Snatam Kaur, Seamus Egan and Peia. Her creative process extends beyond live performance to her recording studio, where she produces and engineers her own work and others.

Celebrated as #1 on the iTunes World Chart and Billboard Top 10 New Age Chart, Ajeet’s music continues to be embraced by communities across the globe. 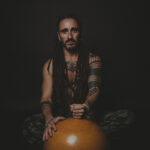 Raffa Martínez is a multi-instrumentalist from Spain, with a deep mastery of world percussion. His sensitivity and joyful presence is celebrated throughout the world, touring with artists such as Ajeet, Tina Malia, Peia, and Nessi Gomez. Raffa has studied music as it weaves together with Shamanistic practices across the globe. Some of his most in depth study and experience has been across Africa and South America. Raffa is a songwriter, musician, and recording artist on his own and with his band Shaman Laika. 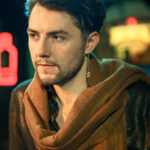 Sam Killeen is a professional guitarist, composer, producer and musical director from Dublin, Ireland. He is regularly performing & touring in theatres, festivals, television, radio, recording in studio and on stage with many different artists in a multitude of genres, including James Vincent McMorrow, Villagers, Lisa Hannigan, Saibh Skelly, Síomha, The Divine Comedy (Neil Hannon), The Scratch, and Wallis Bird.

In 2021 Sam released his debut album Jetlag under the moniker SENU, a home for his unique blend of electronic beats, jazz & hip-hop. With his original music, he has supported acts such as Mark Guiliana,  Evan Marien & Cory Wong (Vulfpeck). He also  arranged and conducted strings for Irish act The Scratch  on their live album anniversary show. 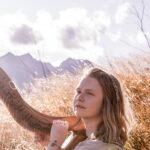 Aisling Urwin is a harpist and songwriter from the seaside town of Kenmare in the mountainous South West of Ireland. Aisling aspires to use the harp in a contemporary context, challenging traditional views in an effort to stretch people’s preconceptions about what the harp should sound like. She is also passionate about the powerful healing properties of music and sound. Aisling often sings in the ancient Irish traditional Sean Nós style(‘Sean Nós’ meaning ‘old style’). Her work reflects the sounds of today’s youthful modern Irish traditional music, an ever evolving tradition. Aisling’s music combines the organic sounds of lever harp and natural vocals with rich electronic sounds and textures. Her fifth album The Dragonfly Jig came out in 2019.

Ajeet has released five albums, which have been celebrated as #1 on the iTunes world chart, and Billboard Top 10 new age chart. Her band members and collaborators help to weave the web of her songs both live in concert and in her released music. Her 2019 album Indigo Sea is a love-labor which was self-recorded and crowd- funded by her fans and supporters.

On January 8th 2021 Ajeet released a new album, together with Aisling Urwin, as Woven Kin. You can listen to their new album ‘Hibernate’ on Spotify. 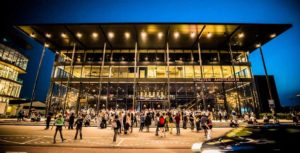 Tickets
This event is SOLD OUT.

Merchandise
Cds will be sold in the lobby. There is no pin machine available, please bring cash.

Travel
Theater Amsterdam is located west of the center of Amsterdam. From Amsterdam Central Station citybus 48 and 248 will take you in 13 minutes to busstop Koivistokade. From there it is a 3 minute walk to the theatre. You can also park in the parking place on the cross Koivistokade/Minervahavenweg (5 euro per hour). Routedescription and use of public transport, here.

Park & Ride
You can also park your car at a Park & Ride. You can park for 1 euro at P+R Sloterdijk and take bus 22 to Zaanstraat if you want to save some parkingcosts.